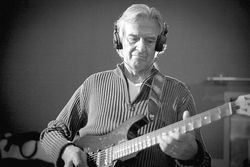 John McLaughlin says he was nervous as a kitten and had sweat pouring down his back the first time he played with Miles Davis on the In a Silent Way sessions in 1969. McLaughlin had just moved to the United States from England to join Tony Williams’s Lifetime group when Davis invited the then-27-year-old guitarist to perform on the album.