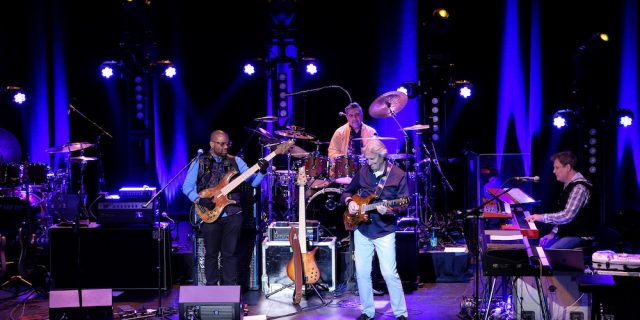 John McLaughlin – a musician’s musician – performs at The Bridgewater Hall in 2022. Cited by Rolling Stone as one of the 100 best guitarists of all time, he received a Grammy in 2018 and was voted “Jazz Guitarist of the Year” seven times by Down Beat, the jazz magazine with the highest worldwide circulation.

John McLaughlin’s band project “The 4th Dimension” brings together musicians from different cultures and musical traditions to form an all-star band. The music of this group integrates all these cultural influences in a unique way while at the same time preserving the spontaneity of jazz.

Gary Husband is a truly versatile instrumentalist, he switches from keyboard to drums with amazing ease and has worked with many well-known musicians such as Jeff Beck and Gary Moore. Ranjit Barot – Indian by birth and living in Mumbai – has been known for years as a globally active drummer for AR Rahman, Bill Evans, Scott Kinsey, among many others and has been a member of 4th Dimension since 2011. Étienne M’Bappé is one today’s world’s finest bass players, performing with Ray Charles, Salif Keita, Joe Zawinul and many others.

John McLaughlin’s impressive personal narrative is much too long to be adequately presented in a short summary. McLaughlin has worked with virtually all international jazz greats, but one thing has always guided him: respect and openness towards other directions, forms of expression, styles and cultures.