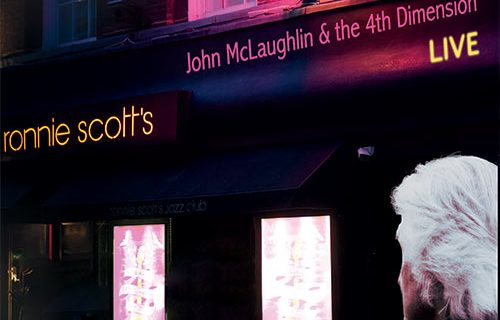 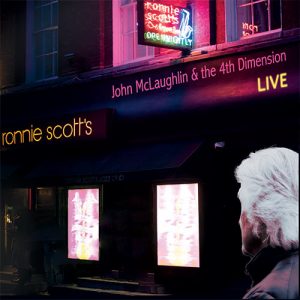 throughout his storied career.

“Ronnie Scott’s…” mused the boundary-shattering guitarist John McLaughlin, “…where would I be without them?” The venerable London jazz club and its charismatic namesake gave so much to McLaughlin’s career, the roots of which extend as far back as McLaughlin’s stint as a member of the club’s house band in the 1960s. Since then, his pioneering spirit, instrumental virtuosity, and improvisational fearlessness have taken him around the world, put him on stage alongside fellow giants such as Miles Davis and Tony Williams, and has given listeners a series of compelling, revolutionary recordings that have redefined improvised music for generations to come.

On September 15, Abstract Logix issues Live @ Ronnie Scott’s – a souvenir of a sold-out, two-night stand at the beloved venue by John McLaughlin and the 4th Dimension, recorded in March of 2017. In the 4th Dimension – Ranjit Barot (drums, konokol), Gary Husband (keyboards, drums), and Etienne M’Bappé (bass) – McLaughlin has gathered a band with the technical dexterity and soulful musicality to do ample justice to his vast catalog. They can follow him anywhere, and together on Live @ Ronnie Scott’s McLaughlin and the 4th Dimension explore everything from early Mahavishnu Orchestra classics to compositions from their most recent studio LP, Black Light.

Most striking about Live @ Ronnie Scott’s is the restraint and fluidity on display: So connected are the band’s four members that the interplay approaches telepathic levels, making for powerfully evocative performances without any wasted gestures. Longtime fans will be thrilled to hear favorites like “Vital Transformation” (from Mahavishnu’s 1971 Inner Mounting Flame album) and “Miles Beyond” (from 1973’s Birds of Fire) reexamined through the lens of the 4th Dimension’s unparalleled sensitivity and facility. Hearing such standards alongside recent compositions like “El Hombre Que Sabia” and the moving “Gaza City” serves to demonstrate the breadth and scope of McLaughlin’s vision, honed over a career now spanning fifty years.

The September release of Live @ Ronnie Scott’s will be followed by the Meeting of the Spirits Tour – a series of November and December shows undertaken in collaboration with one of McLaughlin’s favorite musicians, American guitarist Jimmy Herring. Separate sets by Jimmy Herring and the Invisible Whip and McLaughlin and the 4th Dimension will be followed by the two joining forces for an expansive closing jam based on classic Mahavishnu Orchestra material. These special concerts will also mark McLaughlin’s final shows in America.

As such, Live @ Ronnie Scott’s offers a tantalizing preview of the Meeting of the Spirits Tour. “The intimacy of Ronnie’s brought out some startling playing,” wrote London Jazz News immediately following the shows. “There was no mistaking McLaughlin’s enthusiasm for revisiting these landmark compositions, reconfirming and even rediscovering their quality and longevity.”

Meeting of the Spirits Tour

Nov 01University at Buffalo Center for the ArtsBuffalo, NY