THE MEETING OF THE SPIRITS TOUR Nov-Dec 2017 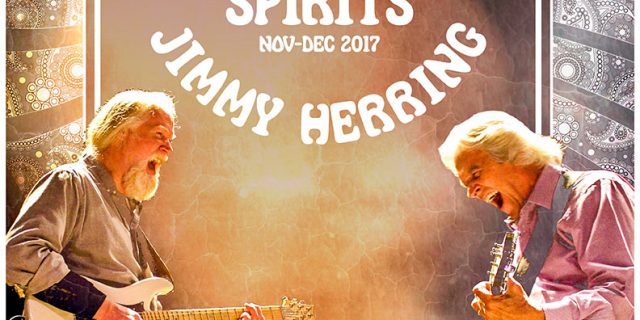 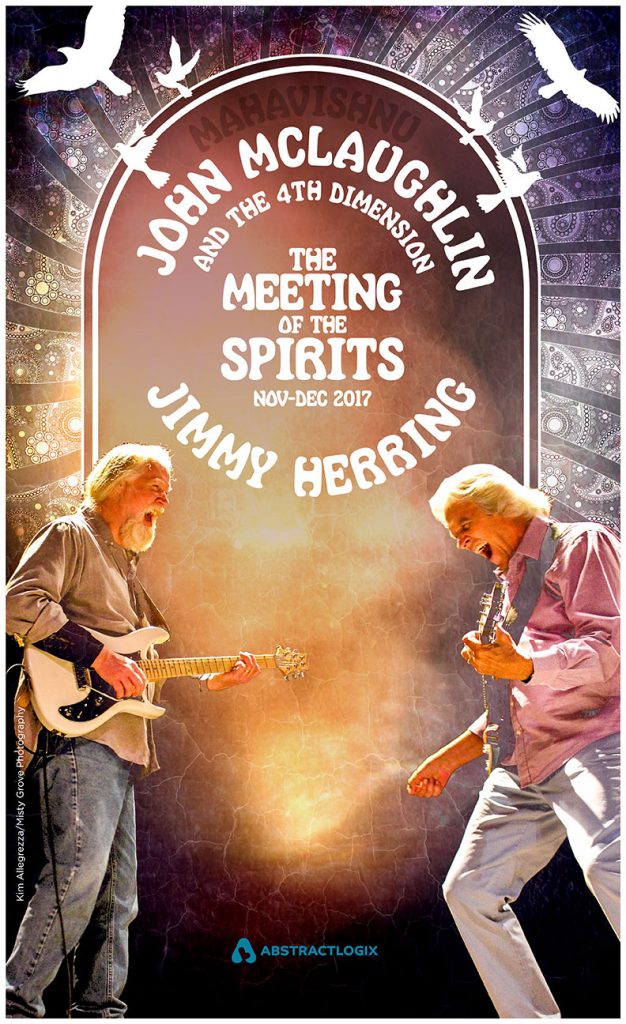 In a career that spans more than five decades, John McLaughlin has honed a personal vision that transcends all boundaries, becoming one of improvised music’s most influential guitarists, composers, and bandleaders. McLaughlin will be joined by the remarkable Jimmy Herring, who has been in the creative forefront of the thriving American rock-jam band movement for 25 years, for what has been dubbed The Meeting of the Spirits tour. Highlighting this musical adventure, will be John McLaughlin revisiting the pioneering music he introduced with his deeply influential, genre-defying Mahavishnu Orchestra.  McLaughlin will be backed by his current band, the 4th Dimension – Ranjit Barot (drums), Gary Husband (keyboards, drums), and Etienne M’Bappé (bass) – each an established composer and recording artist in his own right.

Jimmy Herring, best known for his inspired contributions to the Aquarium Rescue Unit, The Allman Brothers, Widespread Panic, The Dead, and others, will be co-headlining each show with his own band. “Herring possesses the heart and soul of a rocker, the chops and harmonic awareness of a jazz artist, and the simpatico personality of a jam-band player,” according to Guitar Player magazine.  2017 also marks the return of Jimmy Herring as a bandleader since touring after his widely acclaimed “Lifeboat” (2008) and “Subject to Change without Notice” (2012).
On The Meeting of the Spirits tour, separate sets by Herring and McLaughlin will be followed by the two joining forces for an expansive closing jam based on classic Mahavishnu Orchestra material. The tour will feature the first extended collaborations between two of world’s foremost improvising guitarists. Expect special surprise guests to be added when available.

“The music of Mahavishnu is part of my personal and musical history, and as such it is inseparable from me,” McLaughlin reflects. “To return to these pieces with the experience I’ve had for the past 45 years, since the majority of those pieces were played all those years ago, is very exciting.”

Herring adds, “John’s influence on me is far-reaching. When first hearing him, I was struck by the raw emotion and technical prowess he has. If you listen to John long enough, the layers of all the things that make him unique will reveal themselves…Inner Mounting Flame changed my life and the way I heard music. By the time I heard it in 1980, John had long since moved on and recreated himself, as he has done many times throughout his career. It is an honor and a privilege to do this tour with John and the 4th Dimension.”

McLaughlin’s first extensive U.S. tour in seven years, The Meeting of the Spirits also marks his first extended exploration of the Mahavishnu Orchestra material from seminal albums such as Inner Mounting Flame, Birds of Fire, Between Nothingness and Eternity, Visions of the Emerald Beyond and more since the band’s original heyday in the 1970s.

“To play the music of Mahavishnu is not for the faint-hearted,” says McLaughlin, who celebrates his 75th birthday in 2017. “In fact, among the only people I know who have succeeded in interpreting Mahavishnu music are my two all-time favorite guitarists: Jimmy Herring and Jeff Beck. Jimmy is simply a great guitar player, and since we see so eye to eye in music, I know we will have some extraordinary musical experiences touring together.”
McLaughlin strongly feels that this will be his last American performances. He is hoping that all of his friends who have supported him over the years can come out to celebrate this tour with him. After all, it was in America that he met Miles Davis and Tony Williams and played on such trailblazing albums as In a Silent Way and Bitches Brew.  America was the true birthplace of the Mahavishnu Orchestra.