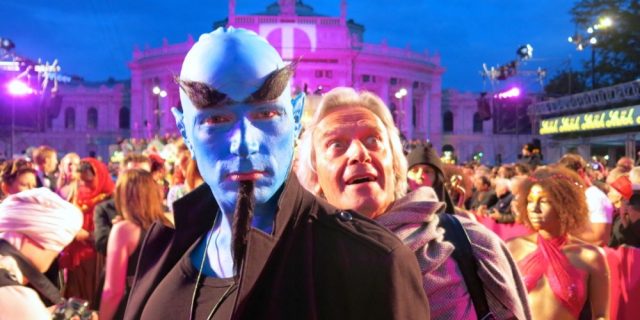 John here again after a long delay, for which I must present my excuses…

I need to write about an experience I had last Saturday night. My wife, Ina and I had the pleasure to be invited by a dear friend Tereza Maxova and her husband to the  » LIFE BALL », which is an annual event held in Vienna, Austria. It was the 21st anniversary of the celebration which began in such a small way, and over the years has grown into one of the biggest parties on the planet.

LIFE BALL has only one goal: to bring awareness about the HIV virus and Aids, and to raise money for research into permanent cures and preventative solutions.

I don’t need to repeat what Wikipedia has written about Life Ball….
There were movie stars, pop stars and even Bill Clinton. Many, very moving speeches were made about the need for us to take care of all the victims of HIV, but especially the women and children who are the principal victims. I have to say that the speech of Elton John was the most powerful and inspiring. You may not care for his music, but as a human being he is great!

Life Ball is the most unusual and frankly amazing combination of the greatest party in the world combined with the talks from people I mention above with songs, dancing and fashion shows, plus some of the most outrageous costumes ever imagined. I will include some photos from the event, and in ending simply say that it is one of the most inspiring evenings I’ve ever had.

With peace and blessings to all,