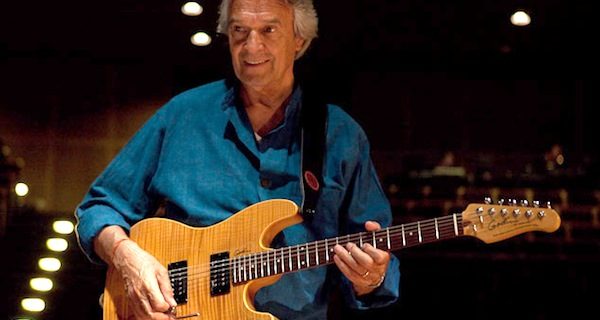 HIT CHANNEL EXCLUSIVE INTERVIEW:We had the great honour to talk with a legendary guitarist and a fine person: John McLaughlin. He is a pioneer of jazz fusion and he has made numerous groundbreaking albums in his career with his own Mahavishnu Orchestra, with Miles Davis, Tony Williams Lifetime, Shakti and as a solo artist. Also, he has influenced countless guitar players in many genres and Jeff Beck called him “the best guitarist alive”. The latest album of John McLaughlin And The 4th Dimension, “Now Here This”, will be released on 16th October by Abstract Logix and online throughwww.mediastarz.com  Every music  lover should listen to it ( look the review )! Read below the very interesting things he told us:

Are you satisfied with the final result of “Now Here This” album?

I’m very happy with this recording. I think the band never sounded better. We recorded it in mid December. The record will come out now, because I had many other things to do. I was touring with Shakti in India, in February, and then with The 4th Dimension (ed: with Indian drummer Ranjit Barot, Cameroon-born/Paris-resident bassist Etienne M’Bappe and keyboardist/drummer Gary Husband ) in Ukraine in early May and then with Shakti in Russia. Two weeks ago, we were in America with The 4th Dimension and in the end of this month we will leave for a European tour. So, we are very busy and what I had to do is a mix in between tours, and that’s wonderful. I’m very happy with the mix and the performance. Because the great thing about studio recordings is that you can play more than one take, you can play a tune 3, 4, 5 times if you like, until everybody is happy with what you play. This record is, I think, that best thing I ever did, from the beginning until today. I say it myself, but it’s great.