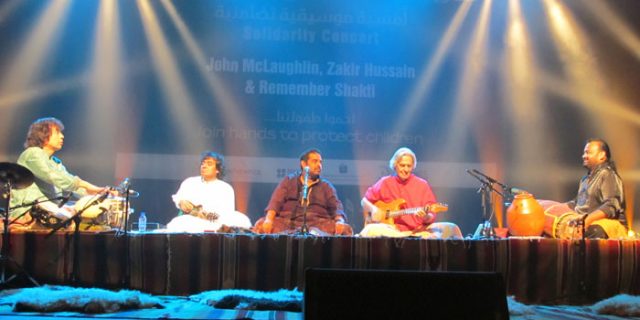 I’m (John) waiting in Vienna airport for my connecting flight home coming from Amman Jordan, and I am still completely inspired and moved by our visit to Palestine.

Three days ago I had arrived with Shakti in Amman, to be met by the people from UNRWA who then drove us by road on to Ramallah. This was to be our final concert after the Indian tour. After passing many, many checkpoints and crossing the Allenby Bridge, we eventually arrived in the occupied territories and the city of Ramallah. I can say truthfully that I was thrilled to be there in spite of the fatigue of traveling and a long early morning flight. We were met at our hotel by the people of Al Mada, the UNRWA and UNICEF,  without whose help our concert would never have been possible. They were as thrilled as we were, that we had actually made it to Ramallah.

This was the culmination of a dream going back several years that had come true, and having coordinated over many months with Al Mada and the UNRWA, we felt as though we were meeting old friends. What we found in Ramallah in particular and Palestine in general, is a country and people who embody the legendary Arabic hospitality. We were treated like princes.

The following day we played our concert to a house that had sold out the day the tickets went on sale, and an enthusiasm rarely seen. The tickets were $5, but frequently they were subsidized by the different associations since to the young people of Palestine, $5 is a lot of money. In order to help the Al Mada association, Shakti played for free. This is the only non-governmental organization in Palestine that treats traumatized children through music. Unfortunately, there are many traumatized children in Palestine. For anyone who would like to know more about Al Mada please click here.

My personal motivation for going to Palestine came through the work Daniel Barenboim is doing there, and he really was the kick starter to my idea to attempt to organize a concert in Ramallah. When I told him about it several months ago, he was delighted. Of course there are other motivations, my personal conviction that music is a true power for healing, but some I only realized while being in Palestine. We’ve all heard about the ‘situation’ in Palestine, but nothing you’ve heard or seen compares to being there and seeing with your own eyes what’s really going on there. There are many, many things happening that never make the news and should. Palestine is in dire need of the world’s attention.

I knew before coming, that I had come here to share the joy and love that we as musicians know is the only reality in life, and in music these can be shared. What I realized very quickly after my arrival, was that I had come to feel their pain which is immense. What impressed me was the quiet dignity with which they carry this pain on a daily basis. Of course, wherever there is pain, there is also joy, and we as a group, saw and felt the joy and happiness that our friends there experienced on our arrival, and later in our concert. They in turn, saw the pain that we experienced on seeing the realities of life in Palestine. I now know, that once you have experienced the pain and joy of a people, they become part of you and your life, and this is what happened to us.

This is not the place to detail the oppressions that the Palestinian people are subject to, but the ‘situation’ must change. In 1984 I wrote a piece called ‘The Wall will Fall’ and five years later the wall fell and Germany reunified itself. I don’t believe my tune made the wall fall, but I know for certain that music helped the wall fall. Perhaps soon I will write another tune called ‘The Other Wall will Fall’ in the hope that the wall that divides Israel from the West Bank, and Palestinian families from each other will also fall, and a peaceful co-existence will triumph.

In ending, I can say that having been once to Palestine, I really want to return again and even dream about more internationally known groups and musicians making the effort to go to Palestine to share their humanity. It’s not easy, but who ever said that anything good comes easy?